An open-source solver for wind-driven rain based on OpenFOAM

The source code for the wind-driven rain solver windDrivenRainFoam can be accessed at the following website:

The following manual assumes that the user has a working OpenFOAM installation on a Linux system and a basic understanding of how it works. For a list of alternative ways to install OpenFOAM on other operating systems or on a virtual machine, as well as the official user guide, please refer to:
https://www.openfoam.org/

In order to use windDrivenRainFoam, one must go into the downloaded folder that includes the source code:

and compile it by typing:

The website mentioned above also includes a tutorial case available for download, which models the WDR exposure of an isolated cubic building. Wind-driven rain is modeled so that the rain phase calculations are one-way coupled with the air phase, ignoring the effect of raindrops on the wind flow. Therefore, the tutorial includes two separate case folders, which can be solved consecutively:

The former is a typical OpenFOAM case for the simpleFoam solver, which comes with the standard OpenFOAM package and can be used to model incompressible turbulent wind flow with steady Reynolds-averaged Navier-Stokes (RANS). The latter is the solver for the continuity and momentum equations of rain droplets using the calculated wind-flow field as an input. The solver has been validated against field measurements of wind-driven rain on different building configurations and during different rainfall characteristics (Kubilay et al. 2013, 2014, 2015).

The following directories and files exist in a typical OpenFOAM case folder. Depending on the solvers and utilities used, the file structure can be slightly different and/or additional files can be required.

To begin, one must go into the folder of cubicBuilding.simpleFoam:

In the tutorial case, mesh is generated using blockMesh utility, which generates a structured hexahedral mesh based on the instructions in file "constant/polyMesh/blockMeshDict". In order to generate the mesh, type:

which will create the computational grid around the cubic building with 10 m height. Mesh files are written under "constant/polyMesh/". Once the mesh is generated and the boundary conditions are specified, wind flow is computed by executing:

Note that, for simplicity, this manual is written for serial calculation. For parallel computation, please refer to OpenFOAM documentation. The resulting wind-flow field, indicating the acceleration around the building edges and the separation zones, is shown in Fig. 1. 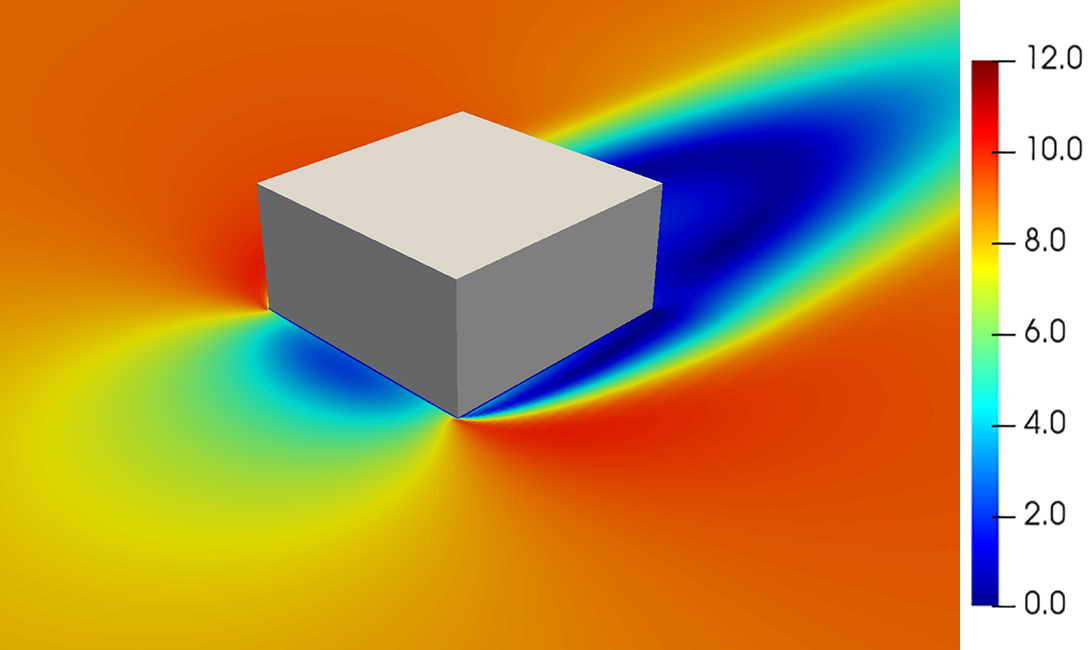 Depending on the modeling requirements and complexity, different steps can be taken to generate computational grid and to solve wind-flow field. However, this is not within the scope of the present document.

The case folder structure for windDrivenRainFoam is similar to the one for simpleFoam with a few differences. First, the field variables required under time folder 0/ are a list of numbered alpha# and U# fields. These files denote the phase fractions and phase velocities for each separate rain phase. The corresponding raindrop diameter for each rain phase is listed in the file "constant/transportProperties" under a list named "phases" as follows in an increasing order of their size:

In addition to the list of raindrop sizes, transportProperties file also includes a Boolean variable whether to model turbulent dispersion of raindrops or not (solveTD), a scaling factor for wind-flow field (scalingFactor) and temperature (temp). Note that the wind-flow field is solved for a single reference wind speed in part B. The scaling factor is used to scale wind-flow field for other values of reference wind speed in order to save valuable calculation time. Such scaling is based on the assumption that, for flows around sharp-edged bluff bodies, the positions of flow separation are independent of the Reynolds number. The temperature value is used to calculate air density, air viscosity and raindrop density.

The file "constant/g" denotes the vector of gravitational acceleration. In cases, where the vertical direction is defined different, this file should be edited. Note also that the content of files fvSchemes and fvSolution under system/ folder are slightly different from the ones for simpleFoam calculation.

As the computational grids are identical, the first step before the WDR simulation would be to copy the existing mesh files into the case folder for WDR simulation.

Once the simpleFoam simulation is complete, the resulting wind velocity field can be copied:

If turbulent dispersion of raindrops is modeled, the files for turbulence kinetic energy, k, turbulence dissipation rate, epsilon, and turbulent viscosity, nut, should also be copied in a similar fashion.

Boundary condition of rain phase fraction (alpha#) at the inlet and top is of type "fixedValue". Here, a fixed value of 1 is used for the alpha values as below:

which corresponds to a normalized phase fraction for corresponding raindrop size. If one is interested in the actual phase fraction, this value should be multiplied by the following relation:

where R_h denotes the rainfall intensity, V_t(d) the terminal velocity of a raindrop with diameter d and f_h(R_h,d) the raindrop-size distribution through the horizontal plane. At the cube walls and ground, boundary condition of type "inletOutlet" is used for the alpha variables. This boundary condition models wall surfaces as outlet in such way that the normal gradient of the phase fraction, \frac{\partial \alpha_d}{\partial n}, equals zero when the normal rain velocity vector is pointing out of the domain, and the value of the phase fraction, \alpha_d, equals zero when the normal rain velocity vector is pointing into the domain. With these boundary conditions, the interaction between the raindrops and the walls are not modeled and the raindrops leave the domain as soon as they hit a wall boundary. The solver does not consider splashing or water-film formation on the surfaces.

Boundary condition of rain phase velocity (U#) at the inlet is set in such a way that the horizontal component of rain phase velocity has a local force equilibrium between wind flow so that the droplets neither accelerate nor decelerate artificially in an unobstructed computational domain. This is achieved as follows: A recycling plane is defined, located downstream of the inlet plane with a certain offset. The raindrop velocity profile at the recycling plane is imposed back at the inlet plane. The inlet/recycling plane couple can also be defined as a “pseudo-periodic condition” at the upstream of the computational domain. This way, the inflow profile for raindrops are generated by itself, which represents a fully-developed rain velocity profile distinct for each separate rain phase. The resulting horizontal component of rain-phase velocity for each different raindrop size will be different as they have different inertia and drag force. This change in the boundary conditions can be performed by typing:

which uses the instructions in the file "system/changeDictionaryDict", e.g. boundary name, offset of the recycling plane. As an example, Fig. 2a shows the resulting velocity profiles at the inlet for droplets with different diameter. The smallest droplets have a similar profile to the imposed wind profile at the inlet, except for the non-zero velocity on the ground, while larger droplets have a considerably different velocity around the building height due to their larger inertia.

Fig. 2. Streamwise velocity profile at the inlet for droplets with different size and b) the resulting catch ratio [-] distribution on the building surfaces and the surroundings at a rainfall intensity of 1 mm/h and a reference wind speed of 5 m/s.

Note that the same approach is also followed for the boundary condition at the top boundary. The resulting vertical rain phase velocity would be equal to the terminal velocity for that phase, governed by the drag coefficients included in the source code.

The solver (in serial calculation mode) can be run by executing:

Once the solver stops (either when it reaches convergence, or when the maximum iteration number is reached), the final timestep is written under the case folder. Under the final time folder, in addition to the U# and alpha# files, scr# and gcr# files are also written. scr# files include the specific catch ratio distribution on the entire surface of the computational domain and defined for each raindrop size in the list "phases" in file constant/transportProperties, e.g. scr1 is for the first raindrop size, which is 0.3 mm. Specific catch ratios are independent of rainfall intensity. In solver code file "calculateCatchRatio.H", these values are multiplied for the probability of raindrop sizes for each rainfall intensity in the list "Rh" in file constant/transportProperties in order to obtain the (global) catch ratio values (Fig. 2b). gcr# files are the (global) catch ratio for each rainfall intensity, e.g. gcr0.1 is for 0.1 mm/h, gcr1 for 1 mm/h, etc.

The solution can be viewed in ParaView by typing:

In addition to the surface wetting, ParaView can also be used to view raindrop trajectories using the "Stream Tracer" function (Fig. 3).

The necessary steps for windDrivenRainFoam calculation can be summarized as follows:

a. Copy mesh from simpleFoam calculation.

b. Copy the resulting wind-flow field (U, k, epsilon, nut) files from simpleFoam case to the 0/ folder under windDrivenRainFoam case folder.

c. Adjust the scalingFactor by editing the file "constant/transportProperties".